Puttin' On The Glitz 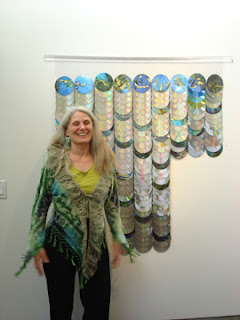 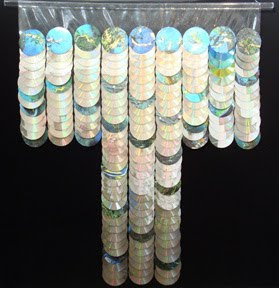 Art Made from CD's
"Seeing The World Through New Eyes"
This piece has been in the making for a little more than 2 years.  When I was in the throes of depression caused by a sense of helplessness after reading in the paper too many times that Antartica was melting and Australia was burning from Global Warming, I decided to distract myself with a trip to Monterey Bay Aquarium on Easter in 2009.  Surrounded by children, I peered through the glass and witnessed for the first time, a creature known as a "Sea Dragon".  Eventhough I had always dreamt of being a marine biologist, somehow, in my 50 years, I missed this amazing animal, with kelp-like appendages growing out of its body!  The perfect camoflage for an animal native to Western Australia.  With my point and shoot camera,  I took photos through the glass.  On my way home, I announced to my husband that I was not depressed anymore and that I was going to crochet a Sea Dragon out of audiocassette tape.  Well, it's been a little more than 2 years, and my "Sea Dragon" is almost finished!  In the meantime, I have expanded my repertoire to include other music media including CD's that I collected from the College of Marin, when the Music Department was Spring Cleaning, in 2005.  As materials go, I covet them and it's not easy for me to use such a precious commodity that now goes for $1.99 at the Goodwill.  However, when the Call For Entry for the show, "Puttin' On The Glitz", came across my email from the O'Hanlon Center For the Arts, for the "Puttin' On The Glitz" show, juried by Emily DeVorin, I knew it was time to haul 300+ of them out of the closet, now buried deep by the other materials I have been collecting since I declared myself to be a fiber artist.
In keeping with my "Upcycle Runway" theme, I wanted to make a wearable piece with the CD's.  However, I hit a roadblock with creating the contours of the body with the rigidity of the CD's, and rather than revert to heating them, I stretched my creative forces and settled for a flat piece.  Having seen kimonos and flat patterns displayed at the Pulp Fashion Show at the Legion of Honor on June 12, I decided to use the icon to express my concern for the oceans and the need to recycle non-biodegradable wastes.  Using vinyl as a base,  I attached the CD's by tacking with thread and adhered photos embellished with Golden's Gel Bead Gloss Medium and gold leafing, using my favorite Golden's Heavy Gel Medium.  Upon seeing the embellished Sea Dragons transform into the planet Earth, I discovered the title "Seeing The World Through New Eyes" and considered how far I had come in 2 years since my trip to Monterey.  Finally, hanging the piece was also a challenge for this piece.  With a background in quilting, I used an age-old technique of creating a "sleeve" by folding over the top of the piece, reinforcing it with the cableties that the juror Emily DeVorin uses as her "signature" material and passed a solid plexiglass rod, purchased at Tap Plastic,  through the top.  Weighing just over 8 pounds, I hung the piece with 40# test monofilament line on both ends.
For the Show, I wore the perfect gllitzy frock and ear rings I wear when I perform on stage.
Elise
Posted by Elise Cheval at 8:47 AM No comments:

New artwork on view through July 28

Hi Art Lover,
Please come to see my newest artwork - a Japanese kimono constructed with hundreds of CD's and photographs I took at Monterey Bay Aquarium when I was in the throes of depression over world conditions.    "Seeing the World Through New Eyes", is a testament to my total transformation.   On view at the O'Hanlon Center For the Arts show, "Puttin' On The Glitz", 616 Throckmorton Avenue, Mill Valley, July 5 through July 28.

I hope to see you at the Opening, tomorrow, Tuesday, July 5, 6-8 pm.   Hear the artists talk about their work, which will be filmed and televised on Marin TV, from 4-5 pm. 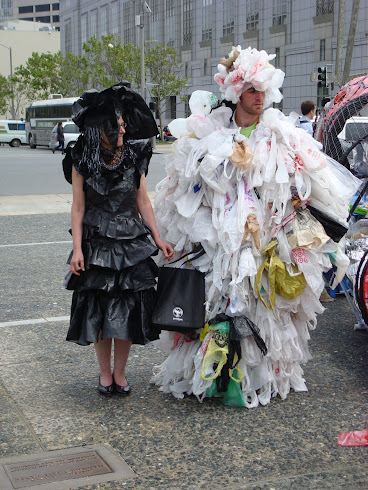